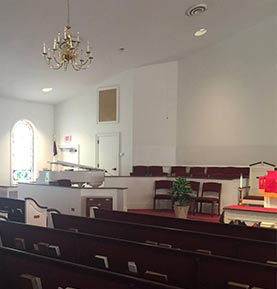 "The roots of the present are deep in the past." We realize the truth of this statement when, through the history of our church, we re-call the experiences and landmarks of the chain of progress from 1913-1996.

Our beginning grew out of a Sunday School fellowship led by the Reverend H.B. Fuller in the old Minnifield Hall on North Main Street. Reverend Fuller was a member of Saint Paul First Baptist Church but did all that he could to enhance Christian Education in the North Anderson area. Among his followers were: James Lowden, Henry Aikens, Gus Gray, Emma Edwards, Anna Sloan, Nathaniel Bell, Paralee Day, Mary Glenn, and Ola Hamilton.

In the year of 1913, under the leadership of Reverend R.D. Glenn, Calvary Baptist Church was organized. Upon a lengthy discussion, moderated by its first pastor, the word "Wilson" was added to the word "Calvary" in memoriam to the President of the United States at the time of its originality.

In the year of 1960, Reverend Sitton left our church family to serve in the State of New York. Following his resignation, the Reverend C. Rudgie Lewis, Sr. was called to be our shepherd. Under his leadership, our church grew from the little white church to our last structure.

Following Reverend Lewis resignation in the year of 1981, the Reverend Cecil V. Clement served as Interim Pastor until such time when a new pastor would be elected. In the year 1981, the Reverend Sidney H. Davis was elected and served until 1989. Following his resignation, the Reverend O.L. Reuben served as Interim Pastor from the year 1989 until 1991. In the year 1991, the reverend James C. Clark, Sr. was elected and still serves as pastor of Wilson Calvary Baptist Church. Under his leadership, our church has grown from the previous structure to the new structure today.

We are grateful for and proud of our glorious heritage. We, therefore, pause at the dawn of a new day to pay tribute to those people who, by their dedicated lives and deeds, have paved the way for this great monument which stands today as a living symbol of their love, faith wisdom, courage, loyalty, and perseverance.